The code considers a stationary plane-parallel slab of gas and dust illuminated by a radiation field coming from one or both sides of the cloud. The incident radiation field can be the Interstellar Standard Radiation Field (ISRF) and/or a star.

It solves at each point in the cloud, the radiative transfer in the UV taking into account the absorption in the continuum by dust and in discrete transitions of H and H2. The model computes the thermal balance taking into account heating processes such as the photoelectric effect on dust, chemistry, cosmic rays, etc. and cooling resulting from infrared and millimeter emission of the abundant species.
Chemistry is solved for any number of species and reactions. 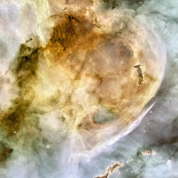 Once abundances of atoms and molecules and level excitation of the most important species have been computed at each position in the cloud, line intensities and column densities can be deduced by a post-processor code.

The Meudon PDR code can be used to study the physics and chemistry of diffuse clouds, photodissociation regions (PDRs), dark clouds, …